Mini Short Story from Many Years Ago 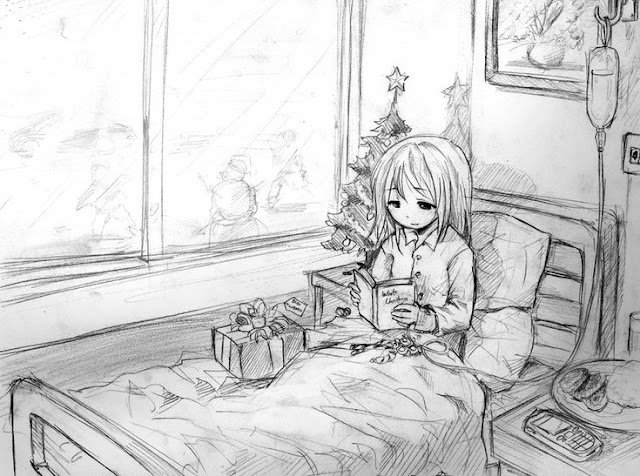 This story, I wrote in junior high school. I'm so taking aback because I was found it in my journal book, behind before cover. Then, I read it, so waste time cause I don't upload it. It's a touching story, in my opinion. At least, I have writing again, in other version. But, first story is the best work.

Altough I was writing it when I studied in junior high school, it was amazing story. So, I want writing it again here, for my new diary also new story. Book story that will be a draft in this blog.

And then, I try to participate a world competition. Long progress, but I'm susprising again. This, My first short story that I have typing in english when I'm junior high school can get the prize. Wow!

Yeah, altough not be grand prize winner, I was so blessed.

So, this is my first story, mini short story how I called it :)

Many years ago, when I work as a volunteer at a hospital, I got to know a little girl named Liza. She was suffering from a serious disease and needed blood transfusion.

The doctor asked Liza's 5-years old brother, "Young boy, your sister is suffering now and she needs your blood. Are you willing to give your blood to your sister?"

I saw him hesitate for a moment, before taking a deep breath and said, "Yes. I'll do it if it will save her."

As the transfusion was progressing, his face grew pale and he began crying. Then, he loked at the doctor and asked with trembling voice, "Will I start to die?"

The doctor answered him, "Of course not, young boy. You will not die because you give your blood to someone. Don't worry."

Then, the doctor asked the little boy, "If you thought that you would die, why did you give your blood to your sister?"

That story was my first short story typing in english. Then, I learned and learned more, until now. Why I do it?

I don't know. But, I just have a think, I want my voice heard by someone. Short story was I felt down through a book. A book was given from Mbak Mardiah, because I won a competition.

Shortstory anthology from Hamsad Rangkuti with title "Maukah kau menghapus bekas bibirnya di bibiku dengan bibirmu" does contain a taboo title. Invites the feeling that this book has rather mature content. However, after I read it, it made anyone fall in love.
The language trait in the classic short story Hamsad Rangkuti.

So, thank you so much for your support, anyone you are. I wish, you can enjoy your story :), your life story, right!